We have been so fortunate to find such loving and amazing families for our little pups.
Webster (now Griffin) lives in Essex Jct, VT with David, Jane and their three boys.
Winnie lives in Brookline, MA with Jeff and Laura.
Echo lives in New Britain, CT with Lewis, JoAnn and their kids.
Tuck (now KoKo) lives in Natick, MA with Bill and Connie.
Wentworth (now Tuukka) lives in Biddeford, ME with Lorne, Callie and their two boys.
Sunny (now Gracie) lives in West Newton, MA with Allen and Michelle.

The pups seem to be changing daily now!  Romping about the back yard and climbing in and out of my raised garden beds they love being out with us.

It's amazing to see the changes in development and skills. From week 4 to week 5 the pups are now bounding about and are so cute to watch as they explore their surroundings. Another "adventure" to the back yard, and their first time "gardening".

The sun was shining and the temp was over 70.......a perfect day for the pups' first outing.

At two weeks the pups have opened their eyes, well, that is when they are awake!  They still eat and sleep A LOT! It's so sweet to see their faces change and see them start motoring around their space "looking" for mom now. Over the next couple weeks life will continue to change as they stay awake longer and start to really explore.

Since the pups are still so little, we can use one of my boys' toy baskets as a safe spot to snuggle while I clean their puppy pen. Devin (my youngest) assists holding the basket while I work.

What's cuter than a newborn pup? A whole pile of them! The puppies love snuggling together. 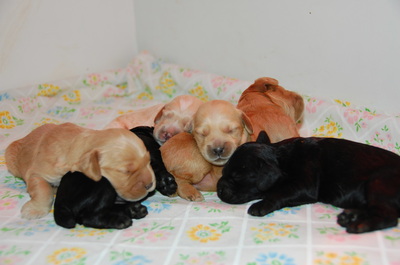 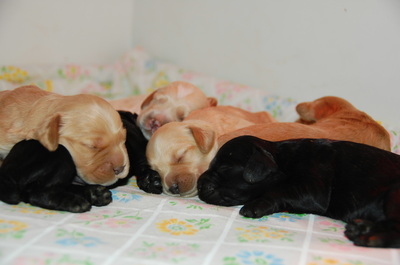 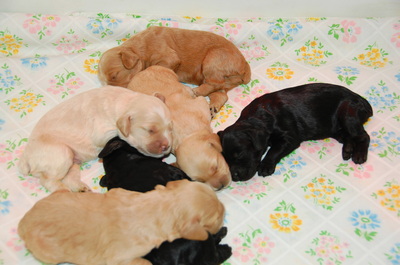 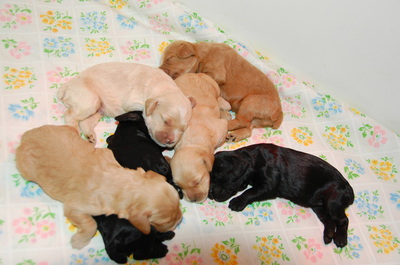 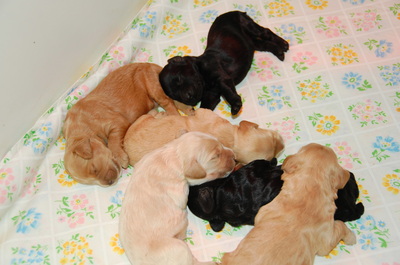 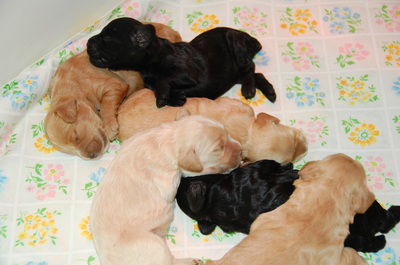 At 8:07am our first little pup arrived, a handsome apricot little guy.  Neeto was wonderful, loving and caring for him immediately.  By 10:30am all 6 pups were born and cuddling with their mom and siblings.  We welcome to our home 4 adorable boy pups (1 black, 2 apricot, 1 buff) and 2 darling girl pups (1 black, 1 apricot).  Watch for pictures early next week.