The March sisters, along with their handsome friend Laurie, are enjoying being outside these days! We thought the nice weather was just a cruel teaser of spring that would disappoint us with a massive snowfall, but it’s lasted, and we are so thankful, because we like being outside as much as the puppies — well, almost! Their exuberance is hard to match!

The #LittleWomenPups have had bushes to smell, dirt & sand to dig through, balls to chase, and pals to pounce on. Their outside play is enough to ensure long naps and lengthy nights of sleep (by puppy standards!), but we’ve added in twice a day training as well. They “get” the clicker and are motivated by treats, so they enjoy the “work” we give them like going through the tunnel and over the ramp. Our Swiss Bernese friend Theo came for a second visit — as a 100+-pound dog, he provided a key socialization item for the puppies. Like just about everything, they took him in stride (barely a tail was even tucked!).

This Saturday they disperse to their excited new families in MA and NH, where we know they’ll be loved fur-ever! As always, thank you new families, for trusting us with the beginning of your puppy’s life! Stay in touch, please!
Amy - 4.8 lb, she's newly named Scout (from To Kill A Mockingbird), going home to Boston, MA!
Laurie - weighs 4.4 lb now and is going home to Burlington, MA with the new name Flynn!
Meg - 4.9 lb - her family in Rollinsford, NH chose a great New England name - Moxie!
Jo - tipping the scales at 3.4 lb, and still rocking the mohawk, she's going home to her new family in Newton, MA!

The #LittleWomenPups’ activity level has increased immensely this week. In between nap sessions, they can be seen gnawing on each others’ legs and tails, initiating wrestling matches, and working hard to figure out their vocals for playtime communication. They also have some new milk to get used to: as part of the weaning process, they get the powdered variety intermittently now. It smells very different from Mama Lacey’s milk, so they still approach the dish like it’s a strange, foreign substance! They are so fun to watch!

With only 4 to observe, we feel we are getting good at predicting their responses to the stimuli provided for the day’s curriculum. But they will all continue to change, and we must be as bias-free as we can while we evaluate them. Our formal evaluations are set for next week on Thursday and then Selection Day for their new families will be next Saturday.
Amy: female, purple collar, 3.2 lb
Laurie: male, yellow collar, 3.3 lb
Meg: female, pink collar, 3.7 lb
Jo: female, blue collar, 2.5 lb

Getting so big! February 27

Lacey and Paddington’s #LittleWomenPups are 4 weeks old and they’ve moved into the stage where exposure to various noises, textures, sights, and smells are a part of their every day routine. As you can see in the videos, they are walking well, with Amy taking the lead to explore the big, wide world and Jo and holding back (this is often the case with the smallest — no worries, they catch up!). No longer in their whelping box, they’ve graduated to a larger space with alfalfa and pine pellet filled potty trays. Sweet and tolerant Lacey is still nursing around the clock— no puppy teeth have erupted yet, but they will be soon, so we’ll introduce a messy mush to them this week.
Meg: female, pink collar, 3.3 lb
Laurie: male, yellow collar, 2.9 lb
Jo: female, teal collar, 2.3 lb
Amy: female, purple collar, 3.0 lb 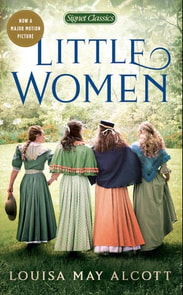 We are delighted to announce our first litter of Paddington-sired puppies! Lacey delivered beautifully over the course of Thursday evening, and these four puppies are growing fat and healthy! Lacey is being a wonderful momma as always, making just the right amount of milk and being attentive without an ounce of over-protectiveness.

We decided to name this litter after the characters from
Louisa May Alcott's Little Women.