All of Lucy's puppies are settling in with their new families! Best wishes to you all and please stay in touch!

Even though it's a gray and rainy day here in NH, these girls keep it shiny and bright. One last photo shoot before heading out to their forever homes. ADORABLE!!!

The puppies have been enjoying the glorious Indian Summer weather spending lots of time playing outside! You may see evidence in some muddy paws and ruffled fur, but they're having so much fun it's worth a little extra cleanup.

The puppies are growing like crazy still and weigh around 3 lbs, 4 oz. They all have such sturdy little bodies. It makes for a nice handful. The girls spend time outside each day as the weather permits. These nice sunny fall days are just perfect for them to play out in their pen. Although Lucy rarely nurses them anymore, she still feels responsible for them. She likes keeping a watchful eye on them when they are outside. They are eating three meals a day now of dog food mush. We will be switching them over to dry food soon since they have very sharp little teeth now. They have some toys in their pen that they like to play with when they are not sleeping or playing outside. This is such a fun stage since they are so interactive now and love all the attention we can give them.

It was a busy day for the puppies today as they were weighed and then ventured outside for the first time for some pictures. It doesn't take much to tucker these babies out and they were all ready for a nice warm meal and a good nap after all that activity! Last week the puppies each weighed about 1 1/2 lbs. This week they averaged just a little over 2 lbs. They are all looking so healthy. Most of their day is still spent sleeping and growing but they are mobile now -although still wobbly- and are beginning to play with each other.

The puppies have had another good week of eating and sleeping -and growing and growing! They got weighed today and are all between 1 lb. 7.5 oz.and 1 lb. 11 oz.  They are just starting to try to get up on all fours but don't really have that feat mastered yet.  And their eyes are opened!  It is so fun to look at them and have them look back :).

We have decided on names and since we like to pick themes for our names, I was trying to come up with a "six sisters" theme.  Well, I don't have six sisters, but I do have four and when you add my mom that makes six of us gals. I may never have the opportunity to name 6 little girls after my mom and sisters again.  A litter of all one sex is quite unusual. Since I didn't want to use my own name, I am honoring my 96 year old mom with two puppies named after her.

The twin apricot puppies are Margaret and Dehlia (with a long "e") named after my mom.

Then come the sisters. The three solid black ones are Judy, Darlene and Clare and then we have a girl who is black with tan markings and that is Debbie.

Lucy's puppies have had a great week.  The six little girls spend their days eating and sleeping and growing!  We did have a bit of a scare last night when we found only 5 puppies in the whelping box! One little gal (who will remain unnamed -because as of now she is unnamed -but I do know who she is! ) had wriggled her way over the 3 1/2" ridge of the door way of the whelping box.  She was found safe and sound happily sleeping behind the box.  We made quick work of adding some height to the door way so that this won't happen again.  I think this is the youngest escapee we have ever had!

We weighed the girls today and they are all between 15 and 17.5 ounces.  They wiggle so much while they are on the scale that it makes it quite difficult to get an exact reading.  But they are looking great - sleek coats and nicely rounded bellies.

Lucy is being a wonderful mommy and keeps a close eye on her puppies.  She has chased our 15 year old cat off several times now. He was just walking past to get to his food, poor guy!  They are normally best of buddies, sleeping together when Lucy does not have babies to care for.

We are still working on names but are getting close to having them chosen. 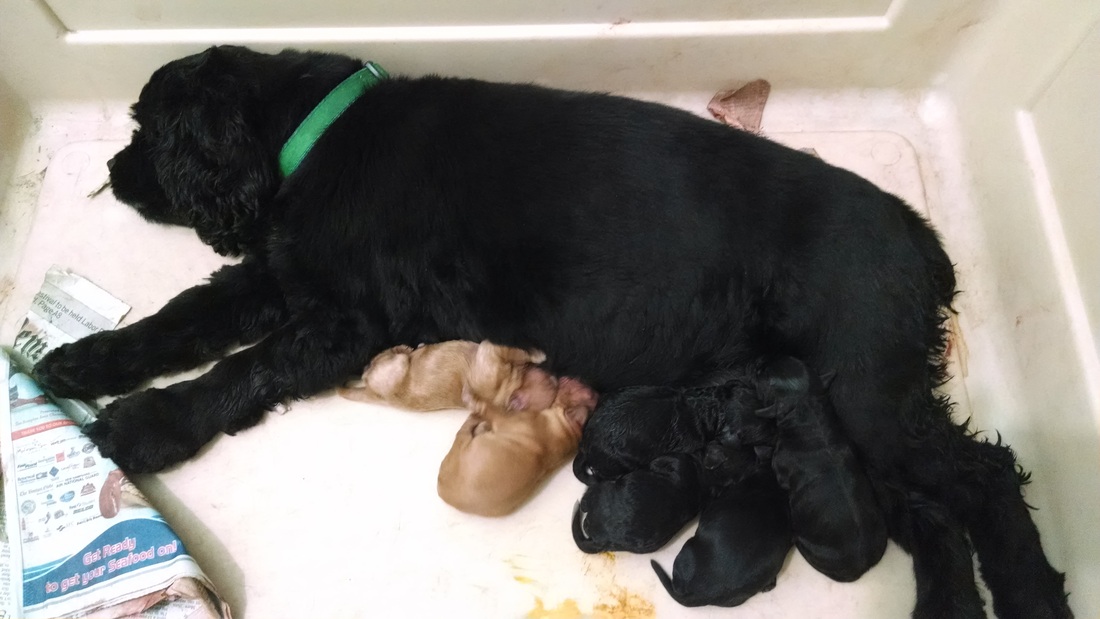