Have you heard the people say that March is "in like a lion, out like a lamb"? I actually can't remember if March 1 was lion-like, but it seems like we have had such a warm, pleasant intro to spring this year. The puppies certainly appreciate it! It was so fun playing outside with them in the sunshine and green grass today!

The pups are a little over 6 weeks of age.  They play with toys, each other and their house mate Bailey.  At this age they look like little bunnies (since they hop more than run).....and how fitting with Easter right around the corner.

Here are a couple of pictures of the puppies doing what they do best right now -- sleeping!

Waiting for their eyes to open now :) 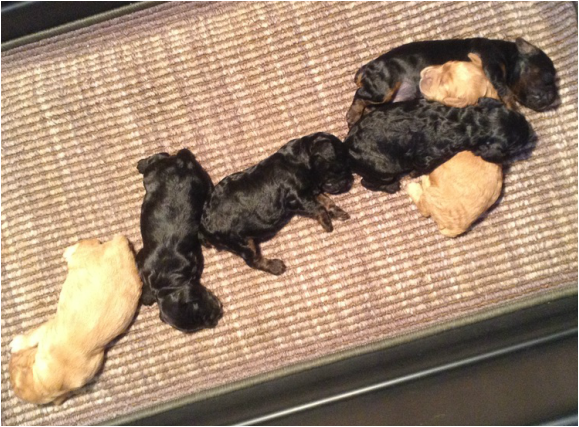 Lucy did a great job birthing the entire litter without any help. She chose the dog toy basket as her preferred location, scorning the whelping box! Mom and pups are doing well - photos to come soon!