Milly and Maisy's puppies are now all 7 weeks old. We had a busy morning last Saturday combining playtime, name and tongue-click training, and grooming exposure. Our living room rug gives them the traction they need to go at lightning speed after each other and their tennis balls. They also go check out their big dog relatives, find any socks that didn't get put away (this is likely to be a lifetime favorite!), and then go back to tackling each other. This goes on until we finally see them taking short breaks; it's at that point their nails get clipped and coats get brushed. And then down for naps.

All 10 puppies show great response to everything, everyone, and all the rest of our dogs! You just can't ask for more! And did I mention potty training -- they are extremely consistent about keeping their #2's separate from their living space. I'll be sending all of their new families home with a bag of the alfalfa pellets we've been using -- you can sprinkle them outside in the area you want them to go potty and I think there will be a near-instant connection! On that note, we know for a lot of you this is your first family pet, so if you have any additional questions about supplies and getting your home set up, please let us know.
Puppy Playtime!
Roly-Poly: male, chocolate parti
Pell-Mell: New name is Barley! female, chocolate parti
Tumble-Bumble: Now known as Brody! male, black parti

​Milly and Maisy’s litters are 5 weeks old now. We had a super fun weekend of meeting new families. We look forward to some more visits this coming Saturday!

Although still sleeping a lot, we see the puppies are eager for people time, too, and the moment we bring them out to play, their excitement and interest in this new world shows!

Did everyone catch the two day “streak” of warm weather? The puppies got to experience it, too! Besides their first time on pavement and grass, we introduced a “tunnel” to the pups, laughing at the puppies who thought it should operate like a hamster wheel. Some tackled it, folding it over on siblings, while others merely sniffed and gazed at the sun. Don’t worry, pups, the sun won’t be foreign to you soon after you’re in your new homes because spring will come soon! Until then, you get a south facing room that brings in some afternoon’s light and warmth. :)
Tumble-Bumble: male, black parti
Pell-Mell: female, chocolate parti
Roly-Poly: male, chocolate parti

So many things have changed since these 10 puppies started walking!

All of the pups from Milly's and Maisy's two litters are fully integrated now. Milly and Maisy alternate feeding responsibilities with all ten pups. We introduced solid food at the beginning of the week, which they all took to quickly. They are still nursing several times a day and have access all night.

Since their prime sensory window has opened, we are now trying to cover all the major areas daily to prepare them for life with their new families.

For one, they’re getting exposure to the grooming table, the sound of the clippers, and having their nails trimmed. To prepare for a lifetime of grooming needs, we also touch them all over, focusing on their feet, faces, eyes, and ears.

Next, we have multitudes of friends of all ages holding them, and my kids are taking them in their laps for reading sessions. I assume by now they’re all accustomed to my one arm football hold as I work around the kitchen.

The puppies are showing mild interest in toys, but they still prefer to tug on each others’ ear, necks, and rear ends! It’s amazing how long a puppy can keep sleeping when his ear is being tugged around by his brother!

Finally, they took to good bathroom habits quickly: when business calls, they ALL seem to be on the alfalfa pellets! 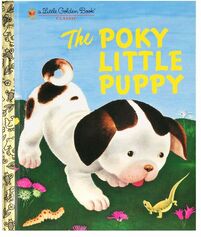 Just as the McLaughlin family had ensured Milly’s newest litter of pups were off to a healthy start and they had rung in the new year with friends, Maisy started showing signs of an impending delivery! In no time flat, her 3 beautiful parti puppies began their journey out to our world, mid-day on Wednesday, January 2nd.

We have 2 chocolate parti and 1 black parti-colored pups. Parti in the poodle and cocker spaniel world means “two or more solid, well broken colors, one of which must be white.”

Their names are from one a cute story book we’ve read around here for years called The Poky Little Puppy, in which 5 puppies go for a walk in the wide, wide world. One pup is extra curious and goes off on some solo adventures, led by his senses:

His curiosity always drove him to explore, making him late to arrive home, and late to get dessert!

None of the puppies in the book (3 of whom have a parti-colored appearance!) have names, but this phrase is repeated several times:

“'What is he doing?' the four little puppies asked one another. And down they went to see, roly-poly, pell-mell,                  tumble-bumble, till they came to the green grass; and there they stopped short."

So we have named Maisy’s puppies Roly-Poly, Pell-Mell, and Tumble-Bumble! As they grow here in our home for the next couple of months, it will be our delight to see their senses develop and what those senses lead them to explore!