The puppies all have new families lined up and new names and they're nearly ready to start their new lives! We've certainly enjoyed the 8 weeks we've had with them and are excited to see them take this next step out into the wide world.

Milly’s puppies rang in their 3rd week of life up on all fours. They can now cross the entire whelping box in a four-legged, somewhat shaky walk. We sit by their whelping box to watch the action, laughing as they swing their little paws at their siblings and take tumbles either flat out onto their bellies or sideways spills. They are adorable! We wanted to let them experience the sunshine and beautiful weather we’ve been having, so these photos were taken outside!

​From the Italian music term meaning loudly and derived from the Latin word "fortis" which means strong, Forte arrived first! We were delighted to see his chocolate and white parti coloring which pulls from Anton's genetics. We chose this name for two reasons: first, on day 1, he was the one calling out to Milly the most, and second, he is the first to experience the hustle and bustle of the McLaughlin household, which can have loud noises at times!

​Dolce arrived just after noon on May 8, 2nd in her litter, an adorable black and white pup! "Dolce" is her name, chosen for its Italian meaning soft and sweet. Though she's the smallest of the litter, like her siblings, she's been gaining weight steadily.

​Coda, born rapidly after big sis Dolce, is named for his 3 black oval patches that remind us of the al coda music sign. When a musician sees this symbol, they know to jump to the next coda, and we thought his name fit because little brother Staccato practically jumped into our lives after Coda, with just a 12 minute interval between them!

​Fourth to arrive last Tuesday was Staccato, a male black and white parti handsome little fella. He has a defined white blaze (white strip between his eyes), so we thought the name Staccato suited him. Staccato notes have a short silence following them, and after Staccato's birth, Milly's birthing process took a 1.5 hour break. He is growing fast alongside his littermates.

​Poco, whose name means little in Italian, wasn't actually the smallest, but is holding her place as the second smallest. She is a chocolate parti colored pup with a centrally-placed brown patch just above her tail.

If Milly's whelping afternoon was like a song, we are glad she played it so beautifully, just like the sonata pieces our 14 year old daughter Tori plays. We all delighted in the fact that she ended her concert by delivering Sonata, another black and white parti female. Though last in place to meet our world, she remains first in place for growth! She sure is a beauty!

Welcome Little Ones! May 8

Milly did a great job with her first litter! Mid-day on Tuesday, May 8, she began delivery of 6 healthy pups. Her motherhood instincts kicked into gear right away to lick, feed, and keep her babies close. She is continuing to nurse her 3 boys and 3 girls devotedly, responding to their calls for comfort, warmth, and nourishing milk! 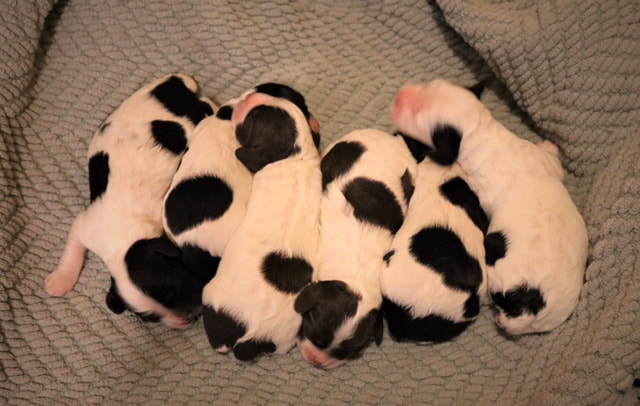 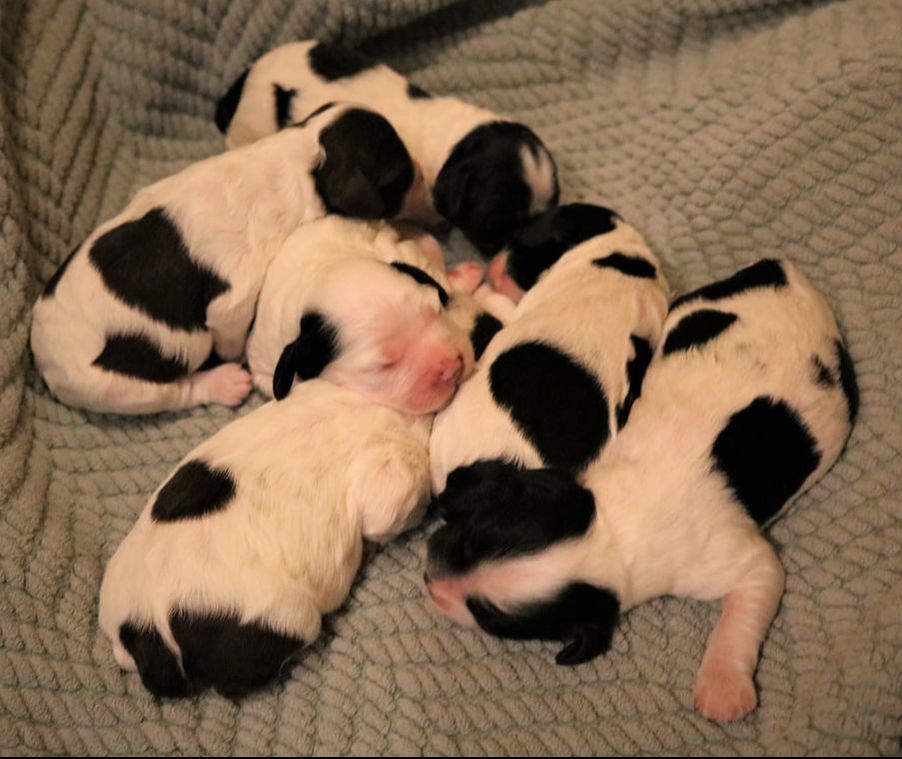