The puppies are 8 weeks old and ready for their new families! We had so much fun taking photos on this beautiful morning; Matthew was an eager assistant and helped me snap pictures of the puppies running as well as snuggling them for some close-ups. We're really going to miss these little guys!
GIMLI
GANDALF - now Gizmo!
SAMWISE - now Tobian!
LEGOLAS - now Zugs!
ARWEN
FRODO
ARAGORN
EOWYN - now Remi!
ELROND - now Porter!

Hot Fun in the Summertime!

As much as the puppies enjoy going out to play, on these hot summer days I think they're pretty happy to get back into the air conditioned house! The black puppies especially are quick to seek out the shade during the peak hours of sunshine, though the apricot pups aren't far behind. The pups are quite clever at finding bits of shade wherever it's convenient; a plant, a basket, or even my shadow. Today we introduced the pups to another new experience; the kiddie pool! As expected, they weren't big fans at first, but soon got more comfortable with the idea of standing in water, and I think they enjoyed cooling down a bit with the boys :-). 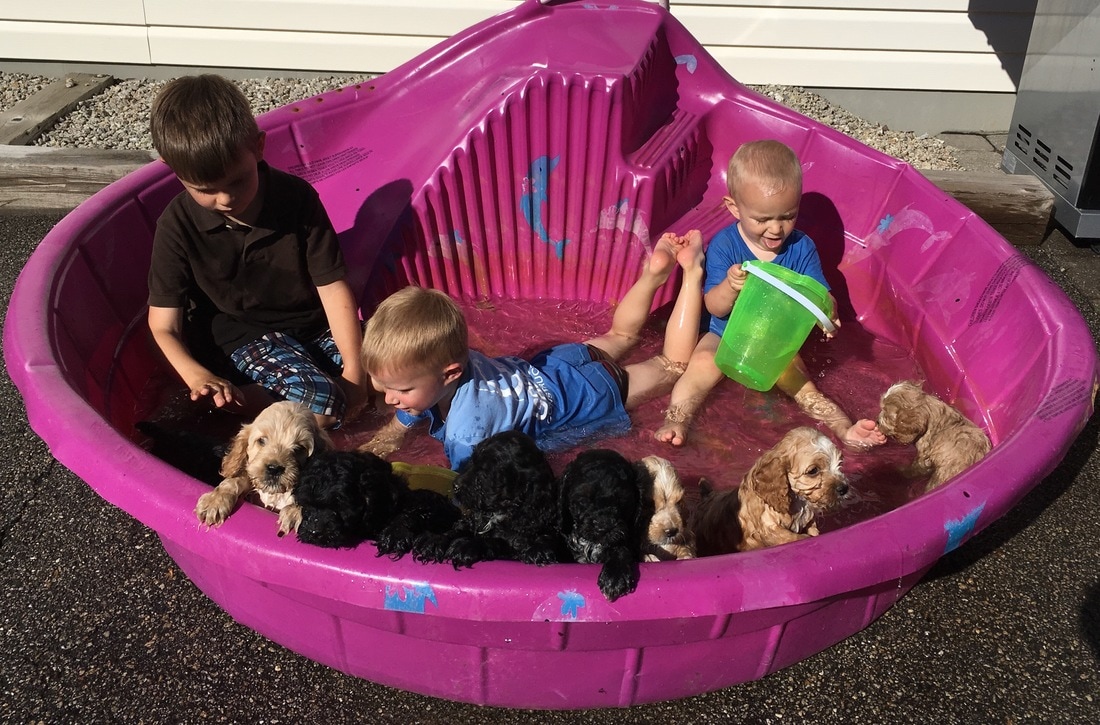 We had a great weekend meeting many of the families for these pups! Now, just a few days later, the puppies are completely done with formula and are nursing just a few times per day. They are still eating softened kibble, but their sharp little teeth will be ready for dry kibble in just a few more days. The pups have longer and longer "awake" times of day, and they spend most of their time wrestling with each other and playing with the boys (and sleeping, of course!)

Mya kindly waited until (almost) daylight before beginning delivery (a welcome change from her normal middle-of-the-night routine!) and safely brought her litter of NINE healthy puppies into the world! The babies are doing everything newborn pups are expected to do; sleeping and eating!