This is such a bittersweet time for me! The puppies had their 8-week checkup at the vet and bravely got their first shots. They have learned so much in the past couple of weeks and have so much more to learn, discover and experience as they head off to their forever homes this week. I'm so happy they have such great families to go home to, but we're definitely going to miss them!
Snowflake - now to be known as Penny!
Mallow - new name is Sadie!
Walker
Belle - Nutmeg from now on!
Holly

In the past few days the puppies have gotten spunky! They wrestle with each other and have been practicing tiny little yips and growls. When one of the kids peeks into their box they all leap up to see what the next game will be. They started eating softened puppy kibbles this week and are big fans of mealtimes. They are looking forward to meeting their families for the first time this coming weekend!
Snowflake - female, 2 lb. 6.8 oz.
Mallow - female, 3 lb. 0.3 oz.
Holly - female, 2 lb. 12.7 oz.
Walker - male, 3 lb. 2.7 oz.
Belle - female, 2 lb. 7.3 oz.

I should say, the puppies CAN open their eyes. But they still spend most of their time fast asleep (even during photo shoots!) It's fascinating seeing their development progressing - aside from opening their eyes and doubling in size, the pups are starting to push up on all four paws. And already at this young age the pups "swim" over to one side of their whelping box to go "potty", rather than making a mess in their preferred sleeping area. We are keeping our house toasty warm with our pellet stove, so the pups don't need their heat lamp anymore. They are sturdy enough that our kids can safely hold them in their laps so they get regular snuggle time with the boys.
Snowflake - female, 1 lb. 6.8 oz.
Belle - female, 1 lb. 8.0 oz.
Holly - female, 1 lb. 10.6 oz.
Walker - male, 1 lb. 13.2 oz.
Mallow - female, 1 lb. 13.7 oz.

Snowflake (Ned Miller, 1959)
Meet Snowflake! First born, petite little Snowflake is 10 ounces now at a week old. Snowflake has a medium apricot coat with a white stripe on her head. A lot of white on her belly and paws helped us choose her name!
Jingle Bells (James Lord Pierpont, 1857)
Meet Belle! Jingle Belle has a medium apricot coat, and a heart on her forehead. She is largely solid apricot, with only a smidge of white on her paws and chest.
The Holly And The Ivy (Traditional British Folk Carol, 18th century)
Meet Holly! Middle born and middle weight (at 1 week she is 14 ounces), Holly has a light apricot coat, almost creamy. She has white paws, white on her head and around her muzzle, and a white bib.
Winter Wonderland (Felix Bernard, 1934)
Meet Walker! Our only boy this litter, Walker is a nice sturdy little guy who weighs just a hair less than his big sister Mallow. He has a medium apricot coat, white boots on his paws, white bib, and a white heart on his head.
A Marshmallow World (Carl Sigman, 1949)
Meet Mallow! Last born and biggest of all the pups, Mallow celebrated her 1-week birthday by hitting 1 pound! She has a dark apricot coat with rich red undertones. Her white boots on all four paws really stand out, as does the swirl on her forehead.

Nabisco rang in the New Year pulling an all-nighter as she delivered a beautiful and healthy litter of five puppies! There is one adorable apricot boy and his four sweet apricot sisters and they are peacefully sleeping through this intense winter weather - who cares about blizzards, bomb cyclones, and below-zero temps when you're snuggled up with your mom and siblings under a heat lamp?! The pups are named for wintery songs: Mallow, Snowflake, Walker, Belle, and Holly. More photos to come early next week! 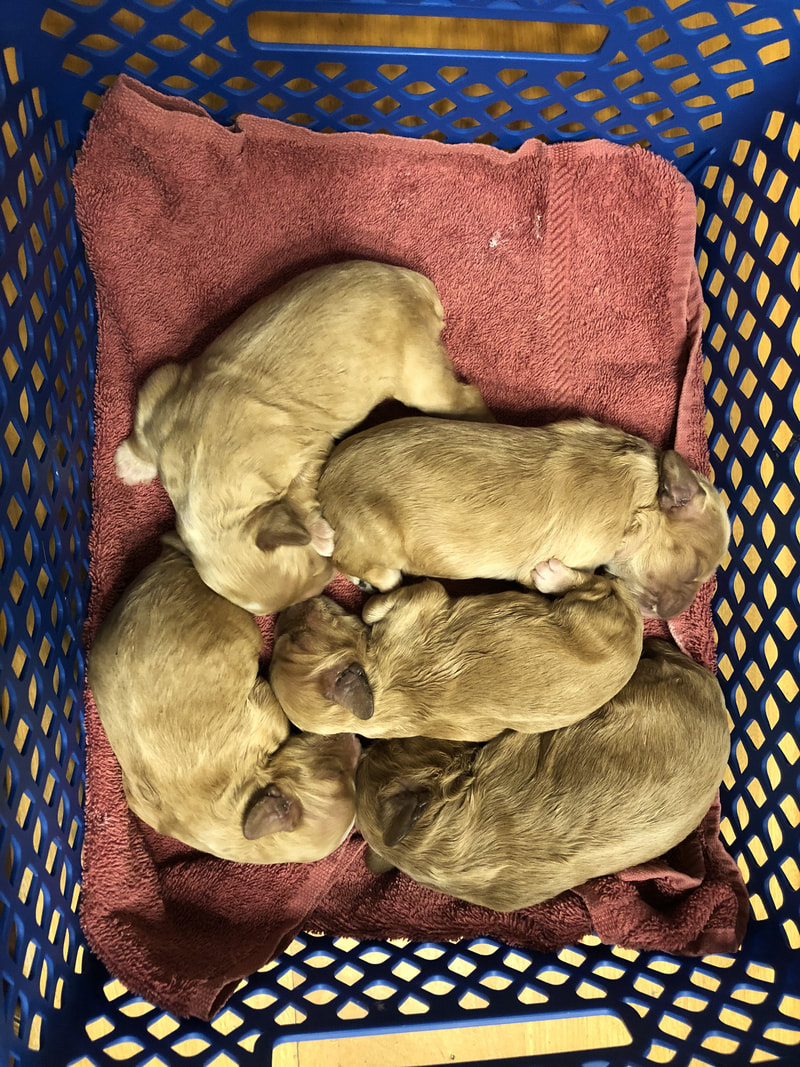