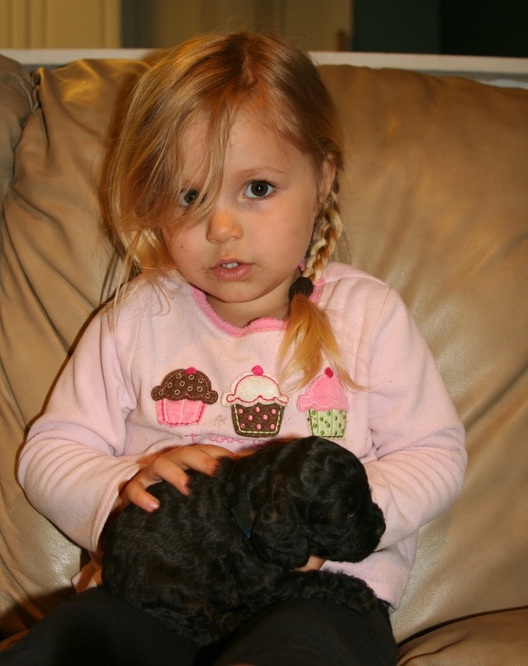 Our friend Jane was enchanted by the puppies. And Moya seemed pretty taken with her as well!

The puppies are so much fun to play with now! They bounce and pounce for about half an hour at a time, then it's naptime for tired-out pups! I'm mixing Pretty & Sunny's puppies here because it was so fun to have them playing together.

With slightly warmer weather the puppies have enjoyed getting a lot more outside play time. And with melting snow and mud, they've needed more bath time, too! While they don't really love baths, overall they're pretty resigned and they do seem to like the massage part!

The puppies are nearly six weeks old now and entering a really fun stage! They love toys now and enjoy playing tug-of-war with each other and us. They are rather indiscriminate about toys and will happily chew and tug on a rag, an interesting magazine article, or a flip flop as quickly as they'll grab one of their stuffed animals or chew toys!

After a couple of days playing in the food bowl, the puppies were in need of some extra attention. They enjoy licking leftovers off each other's coats while they're all snoozing together, but that only goes so far. Today the pups all got to experience their first baths! They mostly took it quite stoically, and we turned the heat lamp back on for the afternoon to make sure no one caught a chill while they dried. Don't forget to look at Sunny's page for more bathtime fun!

Despite not having any teeth yet, the puppies are eager to try "big kid" food. We start them off on softened puppy chow. The results were met with a great deal of enthusiasm and some very sticky paws and faces!

In person it's fairly easy to tell each puppy apart. But in photos it's practically impossible! It was time to get the colored collars out and put them to good use once again.

The puppies are still too small to get to/have to go out in the cold and snow. That day is coming though! Meanwhile, I shoveled a small area for Pretty and Sunny while Joe worked on getting the snowblower started up. Pretty was delighted with the snow and ran into it enthusiastically. Sunny wasn't nearly as impressed. 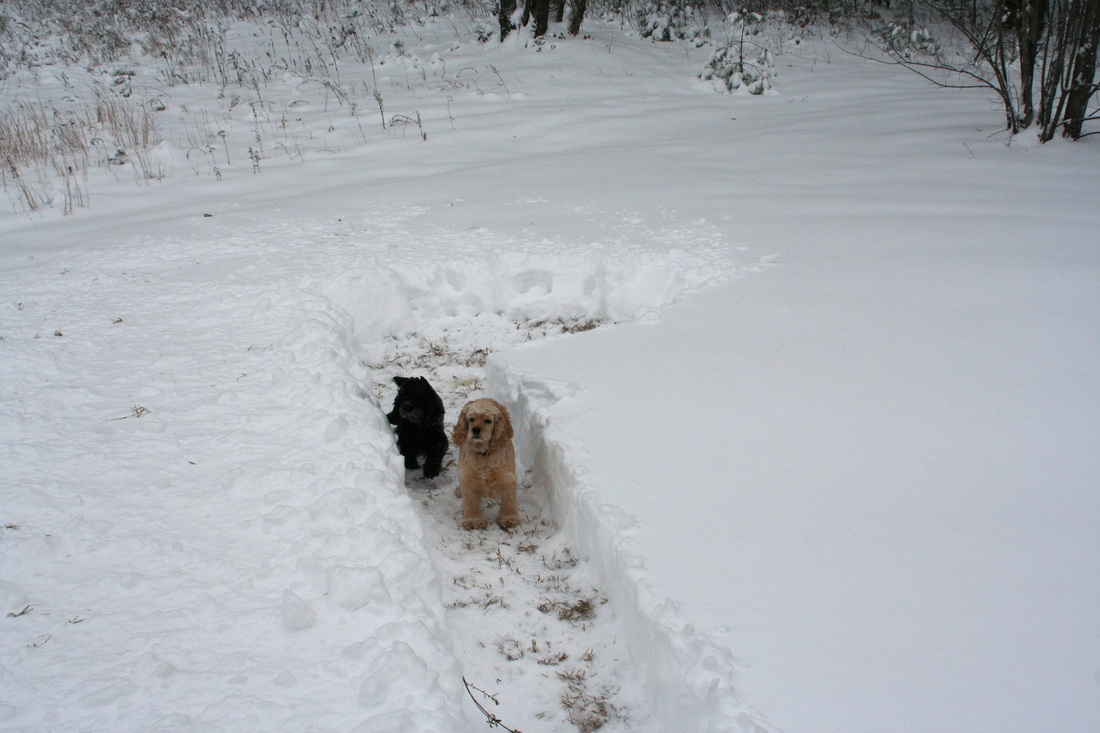 December 10: We have mobility!

Well, sort of! The pups have started wobbling around on all four paws with more or less success. They are starting to feel so confident in their newfound skill that they will actually balance on just three paws in order to bat at one another! It's so fun when they start to play because it's a sign they're moving out of the "newborn" phase into a great "puppy" phase. They're awake a lot more, they start to explore, and their personalities will start to be revealed.

Growing up fast! Pretty's puppies opened their eyes a few days ago and have been busy exploring the world around them. I heard lots of squeaking yesterday and upon investigation found Sequoia out of the whelping box and very sorry to be "all by herself" out in the wide world! Soon they'll be moving up to a big dog pen, but in the meantime they're still nursing pretty much around the clock, so we'll let that continue a while longer.

Pretty's puppies should be opening their eyes any day now! We'll post more photos as soon as they do.

Pretty's puppies are fat and happy! They're so solid and wiggly, it's really fun to snuggle them.

The puppies went for their first car ride today. They came home with a good report from the vet. Everybody is healthy and growing nicely. Thank you very much to everyone who offered suggestions on a theme for naming the puppies - we decided to go with National Parks. I hope you enjoy the selections. All three of my sisters came over today so I had some help taking photos of the puppies - enjoy!

2 boys, 3 girls! We have one black pup, and lots of shades of apricot! The puppies are doing great! They're all sleek and shiny which is just how they should look at 1 day old. We're trying to decide on a theme for the names...if you have suggestions let us know :-) Photos will be forthcoming soon. After I get a couple of hours of sleep!