Our Dutch Haven Cockapoos are very social and love to play with other dogs (and cats!) We'd love to see some of your photos of your DH pup and their best (4-legged) friends!

Alfie (Madi & Nico 2019) and Clive (Maisy & Nico 2020) were going to the dog park regularly, but since Covid they are just having occasional play dates for doggie day care at our kennel. This picture was taken when they first saw each other there last month. Could they be happier to be together? I don’t think so! 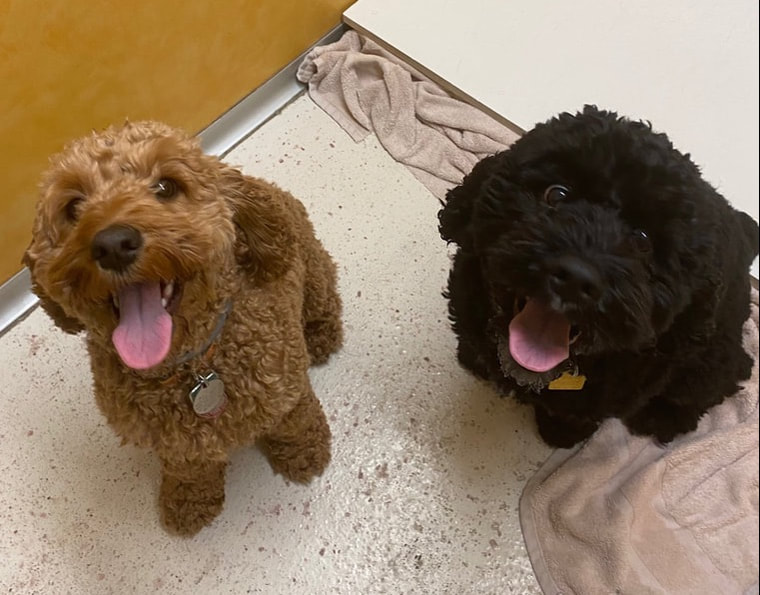 Molly had a fun playdate with a bunch of Dutch Haven dogs in our neighborhood. We took some pictures that we would love to share with you. They might not be the best pictures but it was the best we could get with all these excited dogs. Hopefully Molly and her friends can make it on to the playmates page on your website. Today in our Dutch Haven hangout we had Lola (Pretty & Nico 2014), Zoey (Hanna & Nico, 2018), Cody (Eevee & Nico 2020), and of course Molly (Hanna & Anton, 2020).

Sue became a Dutch Haven family almost a decade ago and since then her daughter and sister-in-law have also joined the DH Gang! Thanks to Sue for sharing this great photo of a meetup between Millie (Charlotte & Nico 2018), Murphy (Lily & Nico 2017), Sofie (Lucy & Nico 2013), and Tucker (Keebler & Ethan 2010)! 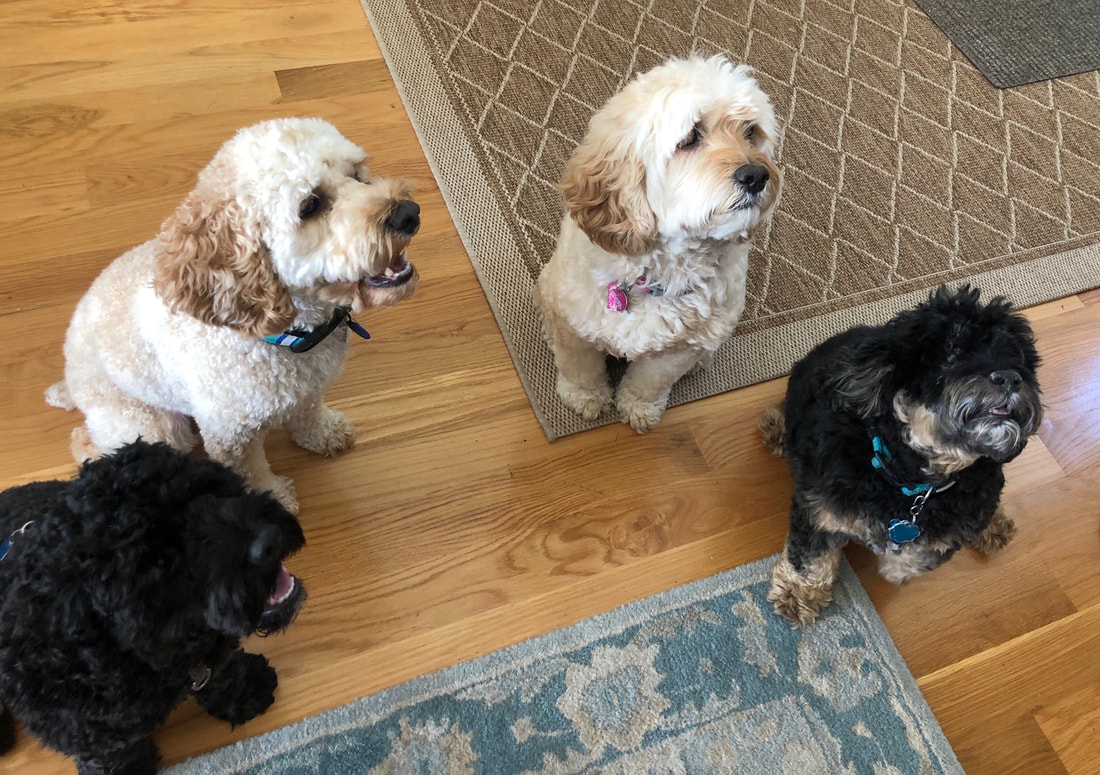 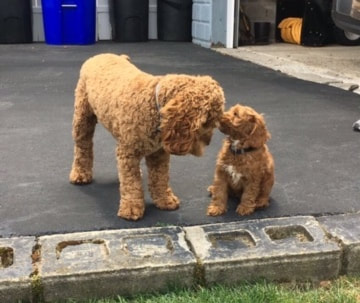 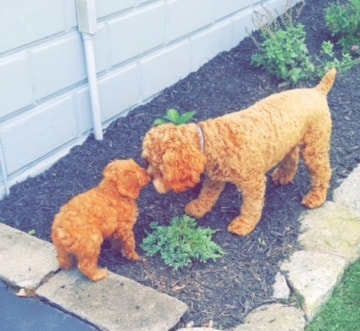 ​Game Day (and beyond) Buddies!

Below are pictures of Rosie [formerly Cora] and Otis of Gracie & Nico's March 2015 litter (baby photos here). Otis's mom Judy says, "We have stayed friends since the very beginning and when Rosie’s parents got married she spent a weekend with us. We watched the Patriots game together and went for walks and basically played all day and night!"

Nutmeg [Belle], Penny [Snowflake], and Mosley [Walker] from Nabisco & Nico’s January litter had a reunion in September of 2018. It was so fun to see them all together again! (Click here to see this litter's baby photos!)
Laurie says, "We kinda forgot that Penny was the runt until we saw Mosley & Nutmeg! But what she lacks in size she makes up for in her big, loving personality, we can’t imagine not having her in our family. Penny weighs about 15 lbs. at 8 months. Some favorites: playing fetch in the yard (she runs so fast!); stealing socks and then trying to hide to chew on them; snuggling up with all of us on the couch; and getting attention from about 15 kids at the bus stop every morning/afternoon - she is very popular in the neighborhood!"
From Adrienne: "Nutmeg is full of energy and sass. She is 8 months old and weighs about 18 lbs. She loves ALL toys - stuffed, ropes, bones, etc. but especially tennis balls! We have a huge backyard that she loves to run around in and she is so fast - I can’t keep up! Nutmeg has recently found her voice and loves to bark at all the dogs in the neighborhood as they walk by. She loves belly rubs more than anything else in the world and would do just about anything for some peanut butter or a bully stick."
Camille tells us: "Mosley was at the vet yesterday and weighed in at a whopping 23 pounds. He’s big but really long and lean! He’s got a sweet manner and wonderful temperament! He loves to play fetch with the MANY tennis balls in our yard (not always eager to bring them back), loves to play in the water, wrestle with his puppy pals and nap in our front window! He still loves chewing on MY shoes but he discovered a “Benebone” at a friends house so we got him one....he loves it! We can’t imagine life without him!!"